The Devil in the White City

The Devil in the White City Tour

Imitated by many, this is the original tour created by Chicago Hauntings in 2004, inspired by the phenomenonal best seller, “The Devil and the White City,” Erik Larson’s brilliant look at the minds behind the best and worst achievements of Victorian Chicago.

The Devil in the White City & Murder Castle Tour

Join us for an excursion through the spaces and places made famous by Erik Larson’s blockbuster, “The Devil in the White City.” You’ll visit sites of Victorian era intrigue, including the site where the Great Fire began, Prairie Avenue historic district, the World’s Fairgrounds and, yes, the site of the former Murder Castle of the only and only H.H. Holmes, “America’s First Serial Killer.”

On this tour, we’ll travel through Prairie Avenue – home to Chicago’s Victorian-era rich and famous, visit the former World’s Fairgrounds in Jackson Park, and—yes— the site of the notorious “murder castle” of horrific serial killer H. H. Holmes. Many believe that H.H. Holmes “murder castle” is an inspiration for the Hotel Cortez in the hit television show American Horror Story hotel due to the sinister intent behind the Chicago hotel construction.

Our tour author wrote the book on hauntings related to H.H. Holmes and The Devil In The White City! 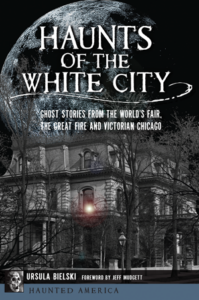 Wear comfortable shoes and warm clothing, and bring a poncho or umbrella (in case of rain) for our walk through the former fairgrounds of Jackson Park. Walking is minimal.