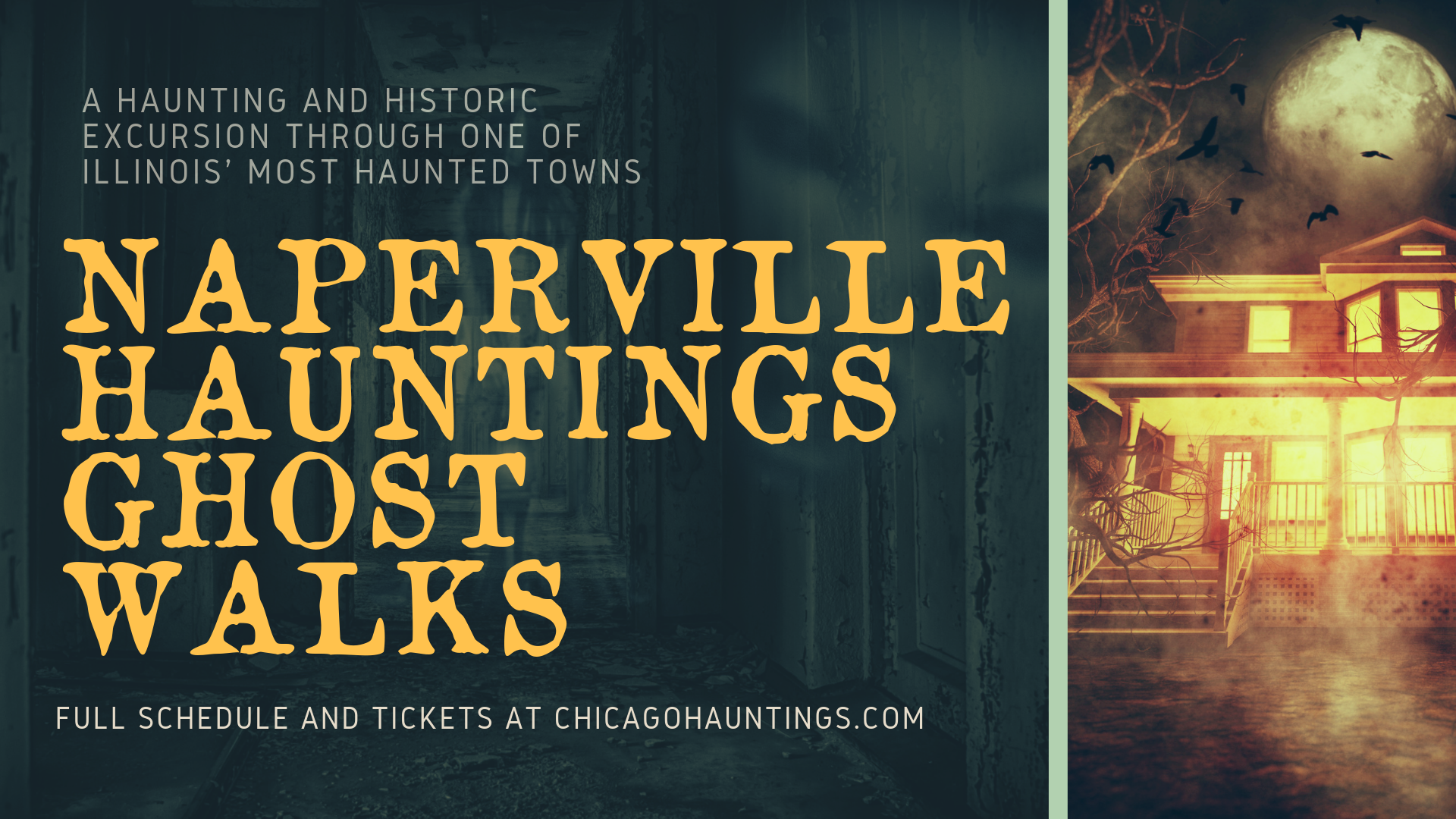 Like a hand pushing up from the grave to grab your ankle, Diane Ladley’s award-winning ghost tours of Naperville return to thrill guests with the hair-raising, true history of our haunted neighborhoods.

“Every town has it’s own dark past and sordid history,” says Ladley, tour founder since 2004. She is a long-time Naperville resident, the author of “Naperville’s Haunted Memories” and “Haunted Aurora”, and is nationally known as “America’s Ghost Storyteller”, a title bestowed by fellow raconteurs during her professional storytelling career. Ladley continues, “Growing up in Naperville my whole life, I heard plenty of hair-raising legends of this area during slumber parties. Imagine my surprise when I later learned that many of those stories were based in actual history.”

Naperville has three roads that hold the dubious distinction for being haunted, each of which are featured on her ghost tour of the beautiful Historic District.

“The old Naperville legend of Chicago Avenue Mary is definitely one of my favorites,” says Ladley. “Her ghost crosses Chicago Avenue at the corner of Ellsworth Street, then walks down the hill to gaze at the pond where the love of her life drowned nearly 150 years ago.”

“I had my own encounter with Naperville’s Weeping Bride late one night when I lived in the Historic District in the ’90s. I was awakened by the sound of horse’s hoofbeats on the road below. I looked out my window, but there was nothing there, even though I followed the sound, clip-clopping west to east along School Street. There was even a Doppler Effect as it grew louder the nearer it came, then quieter as it passed, before stopping suddenly…and it didn’t start again. I swear with my hand on the Bible that it’s an absolutely true story; and I’ve had several others tell me they’ve had identical experiences.”

There are also the multiple ghosts said to walk along 4th Avenue, still confused and dazed, just east of the downtown Naperville train station. It’s the site of one of the worst train collisions in American history, that took place on April 25, 1946. Forty-seven people died in that accident. They were laid out along the side of the road as Naperville residents tried to piece together separate individuals from various found body parts, like horrific puzzle pieces.

It’s one thing to hear the spooky tale; it’s quite another to physically stand at the actual location where one of the city’s darkest events of the past occurred. And it’s even far more than that when your electromagnetic field (EMF) detector provided by the tour suddenly starts to flash and beep, which makes you wonder with eerie, hair-raising fright…Is the ghost of the tale standing next to you, listening about their own tragic demise?

Diane Ladley’s Naperville Hauntings historic ghost walks are offered on weekends and select dates from now through mid-November. They last from 90 minutes to two hours, depending on whether or not the EMF meters provided on the tours decide to get lively. “Which they often do,” adds Ladley, “Especially on the Naperville tour”.  Private ghost walks, progressive haunted dinners, and trolley tour parties can also be arranged by request.

The Naperville Hauntings ghost walks dearly depart at 8:00 PM from outside Quigley’s Irish Pub, 43 E. Jefferson St. in downtown Naperville. The walk is approximately ten blocks round-trip along the elegant Victorian mansions of the Historic District, and is entirely handcapped-accessible.

Founded in 2004, Ladley’s Naperville ghost walk tours are the oldest in Chicago’s far west suburbs, and was the winner of the “Best Naperville Attraction” award three years in a row.